The entire endeavor was an exercise in thinking on my feet. From the time that the voice mail was left on my phone until the filming for the section I was involved in was completed, only 13 days passed. It had been my plan to use the days leading up to load-in and filming to prepare my paperwork, and to write cues blind so as to be better prepared for the very tight time-frame. However, despite my best efforts I was unable to get an inventory of equipment, or diagram of the space until I arrived for the load-in and focus 36 hours before the start of filming. This of course made any advance cueing impossible. After the first day of load-in, I went home and worked up full paperwork for the design that had been created that day. While I initially viewed my paperwork efforts as unnecessary and/or a bit anal-retentive, in the end this work would prove to save my behind, and allow me to roll with the punches the production would throw my way.

For the Regionals I was tasked with lighting three pieces. The two lead groups: The Bellas and The Trebles, and a third group called the Sockapellas. The Sockapellas had the simplest look of the three and in some ways they are not of the same level as the other two groups. The Bellas are still evolving as a group, and while the “stars” of the movie, they are not fully up to speed at this point in the movie, whereas The Trebles are the long-term favorites who have been winning for years, and are a crowd favorite. Their piece was to have the highest energy and most flashy look.

Prior to load-in I took the rehearsal videos I was given for each piece, and edited them by overlaying text to indicate the lighting cues I was envisioning. As the “also ran” group, the lighting for this group was to be the least flamboyant, while still having a theatrical element.

Prior to load-in I took the rehearsal videos I was given for each piece, and edited them by overlaying text to indicate the lighting cues I was envisioning. As the “crowd favorite” group, the lighting for this group was to be the much more flamboyant than that of the Sockapellas.

Prior to load-in I took the rehearsal videos I was given for each piece, and edited them by overlaying text to indicate the lighting cues I was envisioning. For the Bellas, this marks a turning point. The lighting starts off rather sedate, but then “rocks out” toward the end.

Below are the three sheets of “inventory” that were provided when I arrived for load-in and focus 36 hours before filming started. 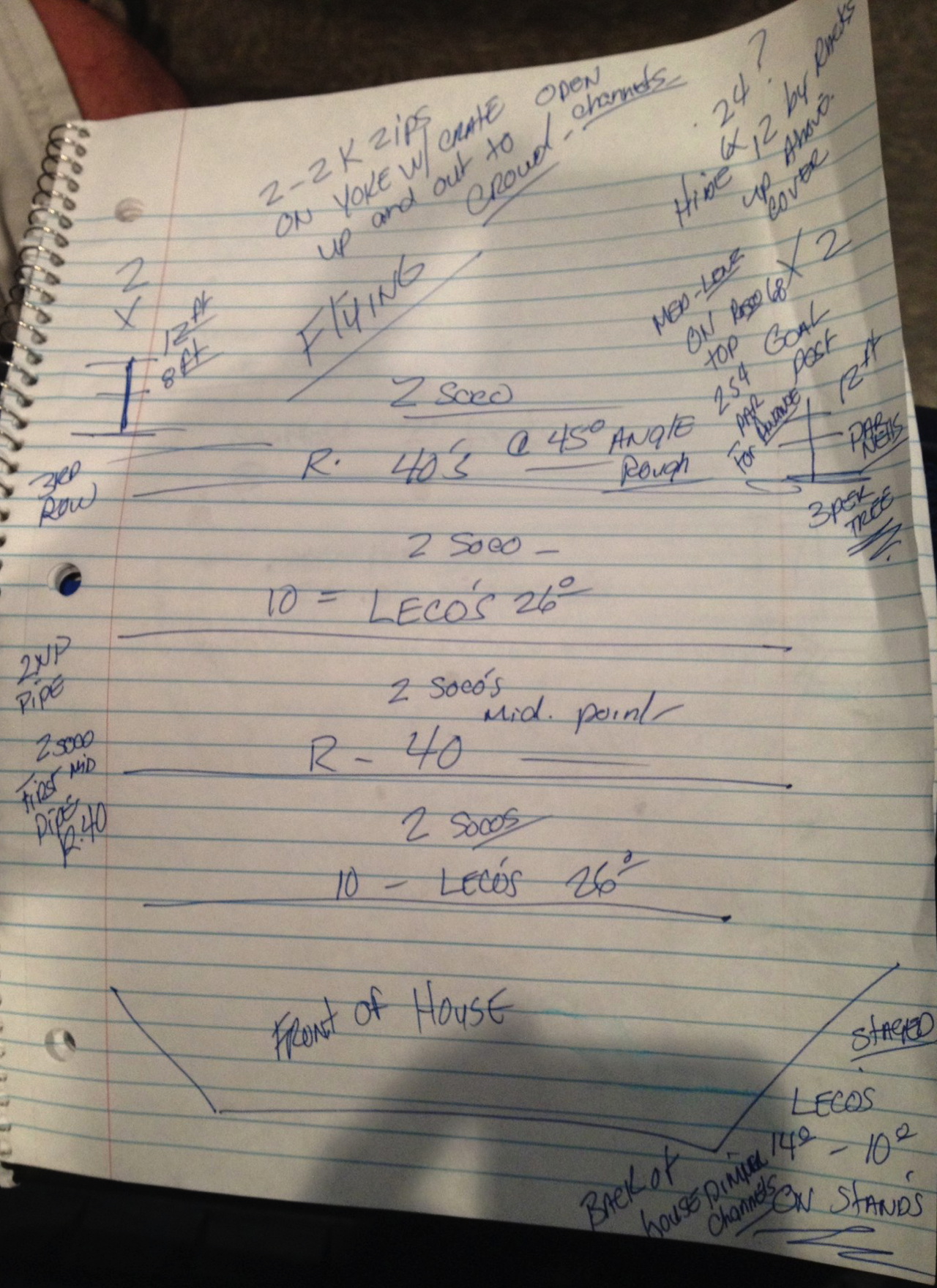 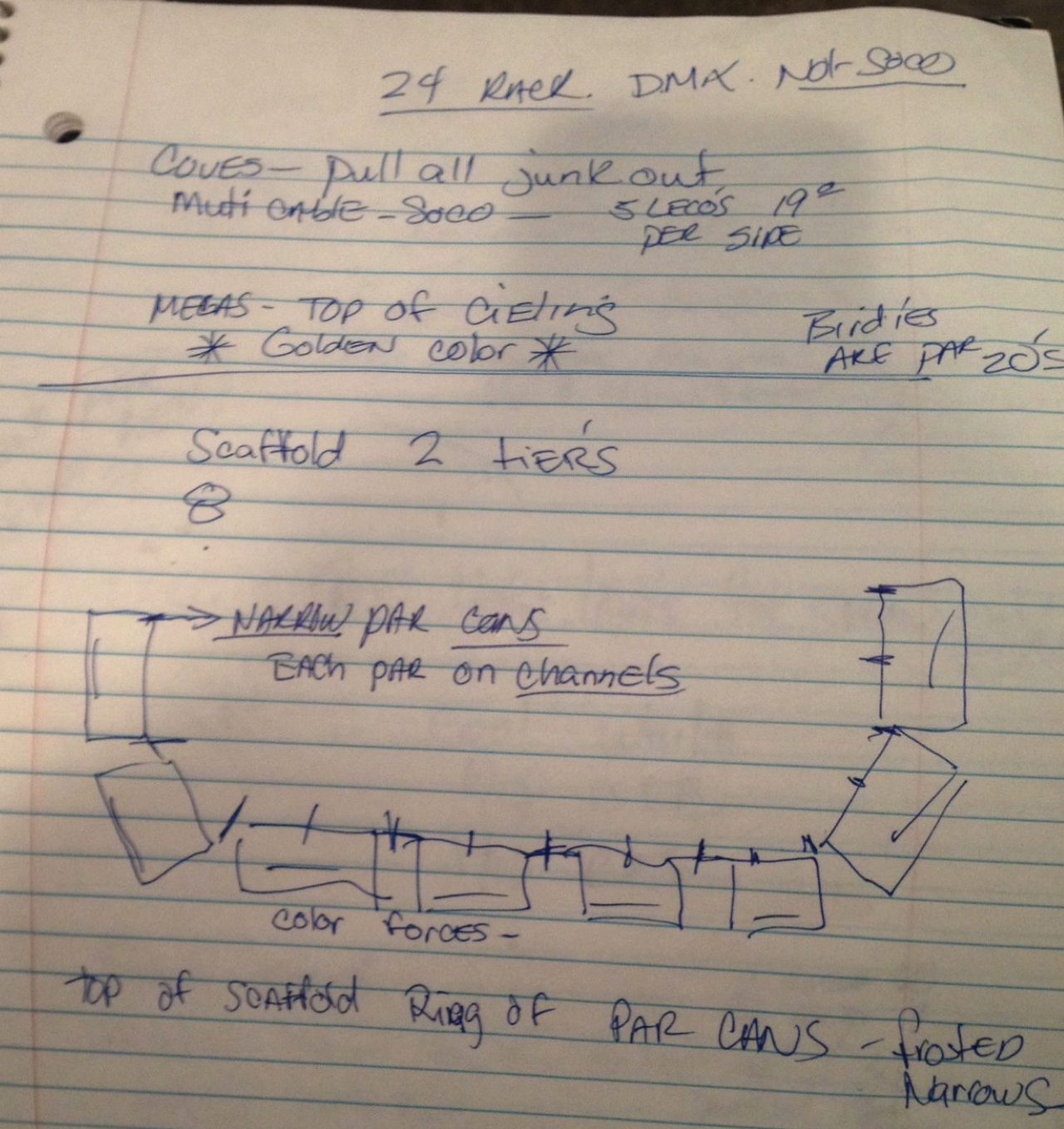 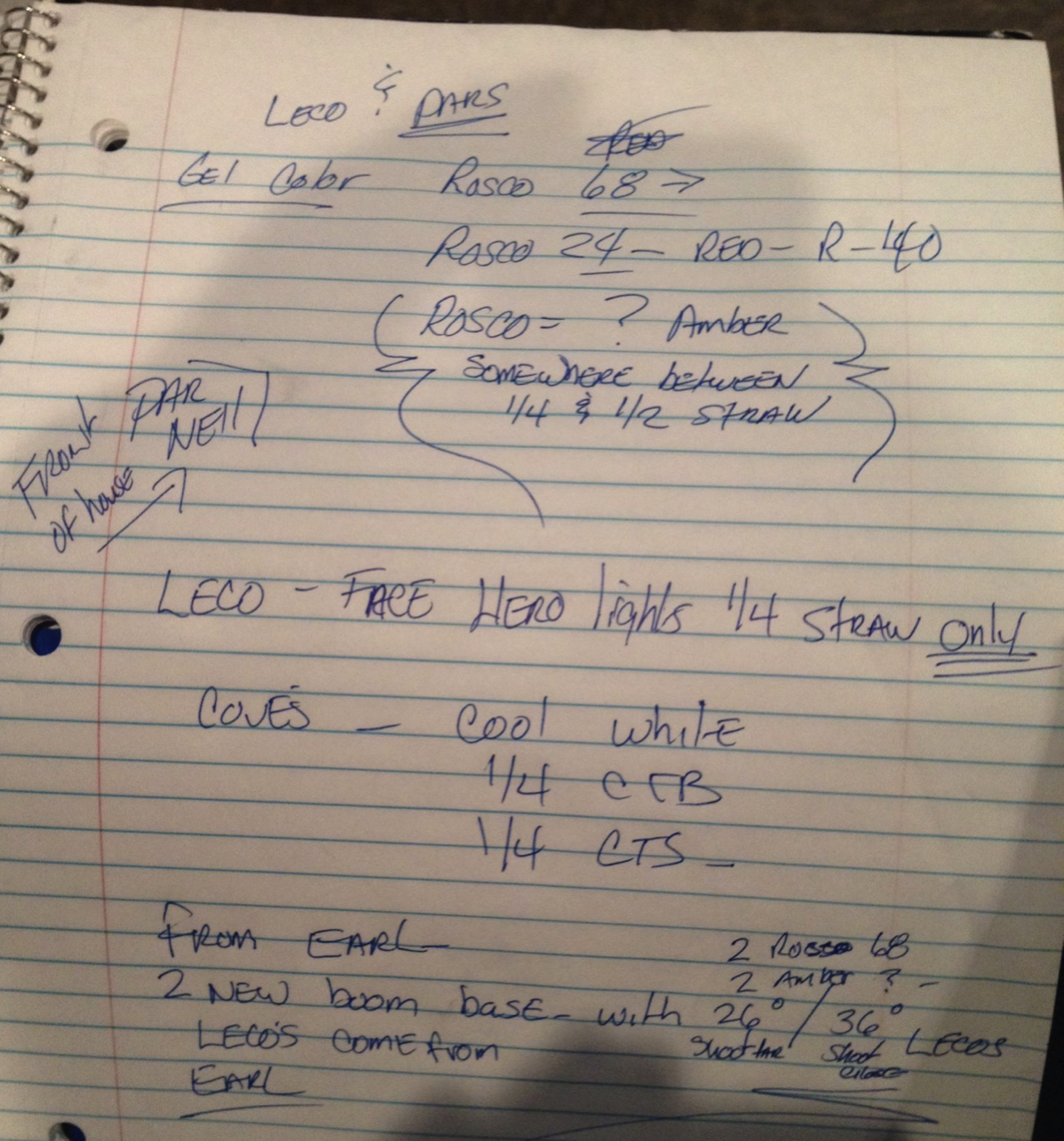 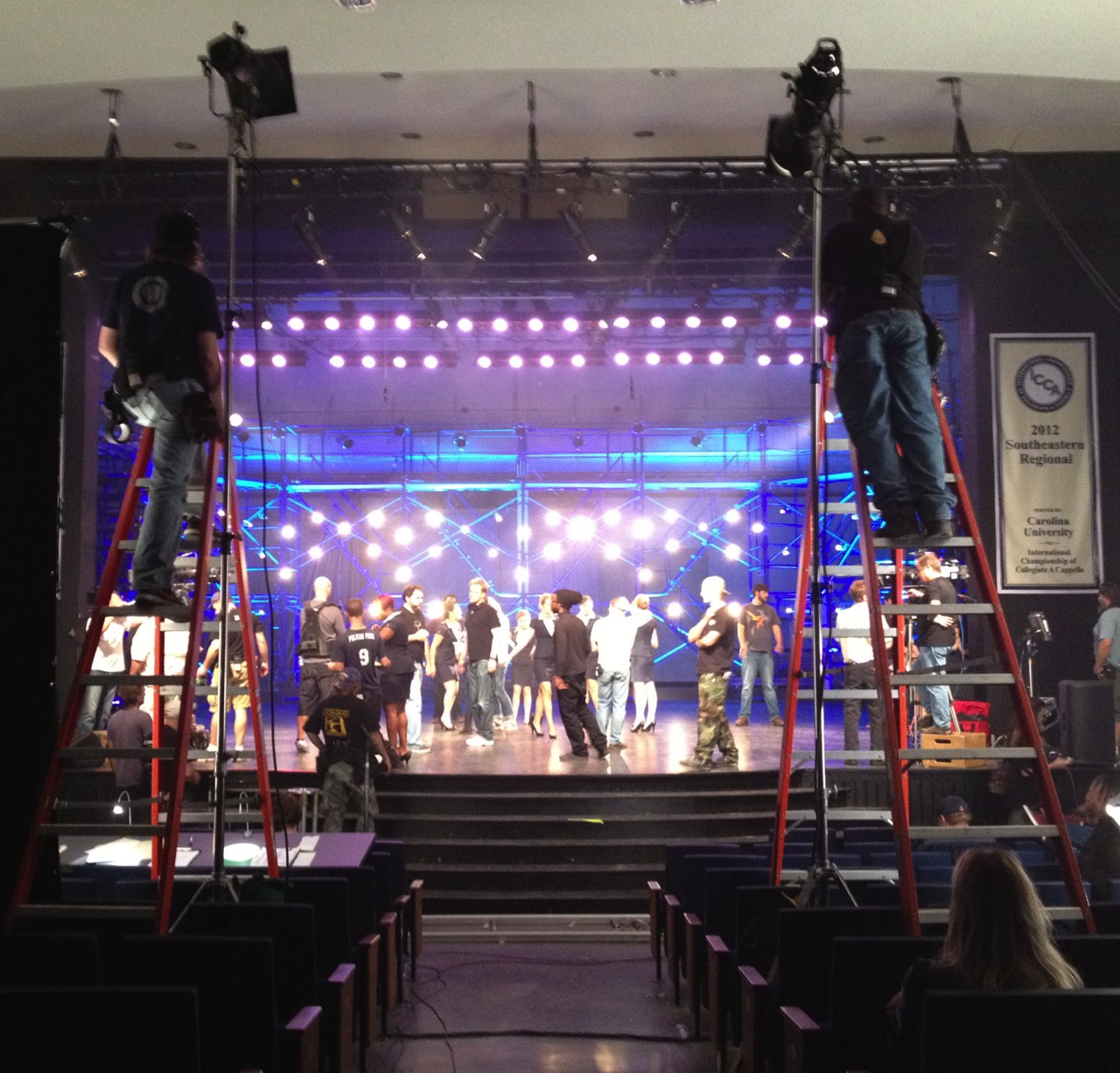 A view from my seat at the lighting console during filming

Cueing notes for the production.

Worksheet for placement and circuiting of set-mounted “birdies” (Placed and circuited starting 90 minutes before the start of filming, while I was writing cues)

Images captures from the movie 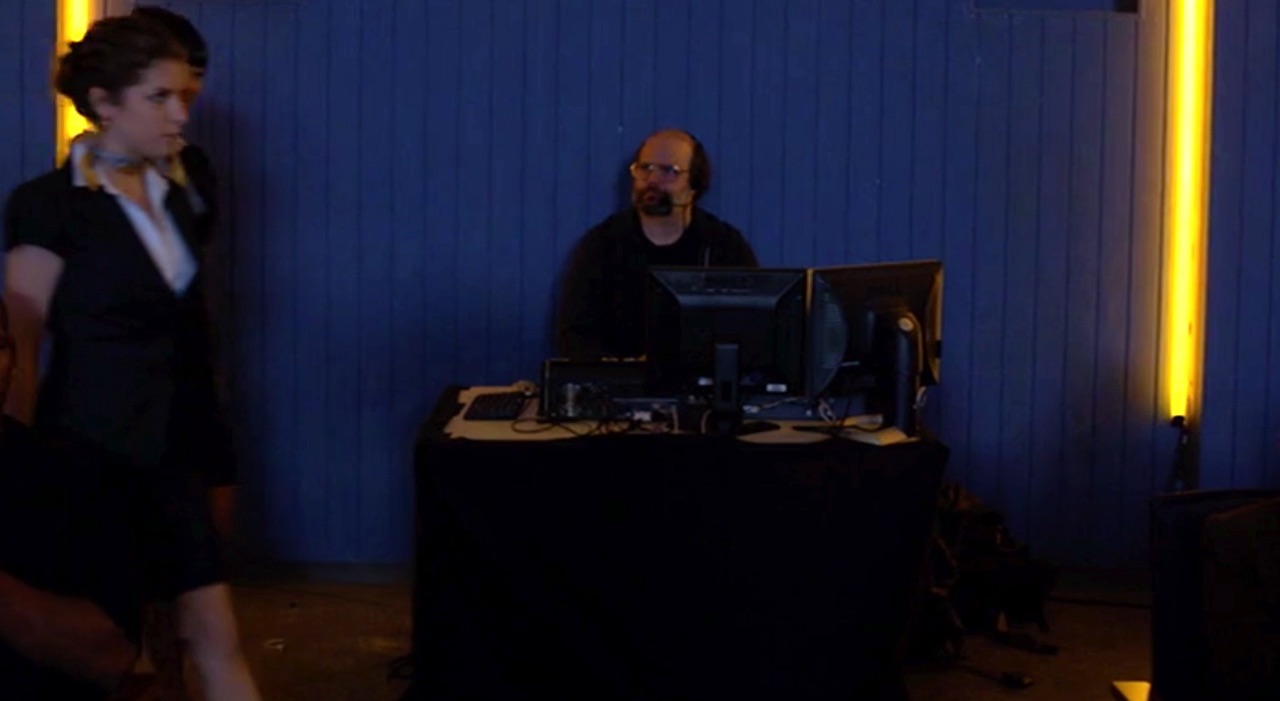 Not only did my design make it to the screen, so did I, Seen here at the lighting console as I ran the lighting

Start of the Bellas Performance - Cue 1

Start of the Build into the Bellas finale - Cue 11

Just before Cue 65 - Explode of the main vocal

A Close up during the Trebles high-energy song